I thought I would share a little of what makes the Caribbean side of Costa Rica – Costa Rica for me. 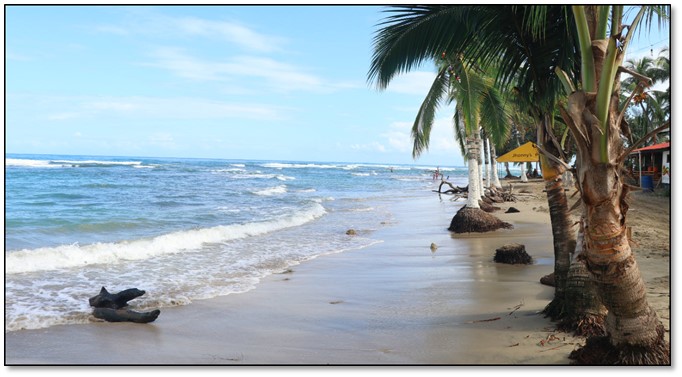 Well yes, the beach! This beach is in Puerto Viejo. Of course, the whole eastern side of the country is beaches. Because tourist have not over run the beaches here you can; jog, sun bathe, yell, sing, dance or just lay on the beach without interruption or anyone around most of the time. Especially if you get away from Cahuita or Puerto Viejo. Don’t get me wrong there are a couple of other popular beaches. Cocles Beach, Black Beach (locally called: Playa Negra), Punta Uva and Manzanillo. Manzanillo is the last beach before reaching Panama. After the beach there is the National Park of Manzanillo separating Manzanillo beach from Panama.

Punta Uva is 2 kilometers (1.2 miles) south of me and my favorite beach. Why you ask; nice little bike ride to. Plus, it’s a long beach (meaning I can jog),

it doesn’t have a bunch of tourists, generally, and there are a few good places to lock my bike. Now don’t get me wrong, there is a dive center, kayaking, boat tours and snorkeling for tourist. But I normally go to the beach between 6 – 6:30 am each morning for my jog. The only people I typically see there are some local fishermen.

This next item is the Costa Rica coffee maker. I think that was made up by the tourists not the ticos (locals), as they are called. 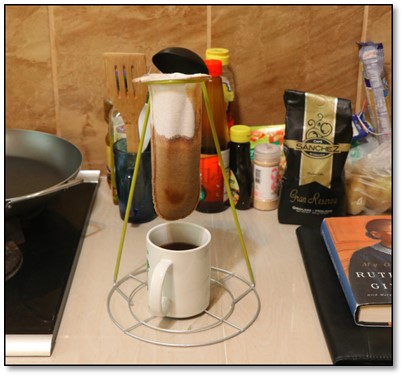 It is perfect for me because as a rule, I typically have just one cup of coffee in the morning.

After I have that cup of coffee, I run around take pictures, do my household chores, have lunch then… I kick back in one of the other Costa Rician popular items here, the hammock.

I will tell you right up front, I was not big on this idea of laying up in the air at first. But it is addicting! At this point I would not be caught dead without my hammock. There is nothing more relaxing than laying in the hammock with a cool ocean breeze and/or soft down pour of rain drops to put you in a state of peaceful bliss. It’s paradise.

Also soothing here in paradise is the sound.

This sound bite is only about 1:45 minutes but it will give you an idea of the peaceful serenity here. It is a soft rain fall pattering on the roof and leaves. At about 1:30 pm you will hear the howler monkeys off in the distance near the end. 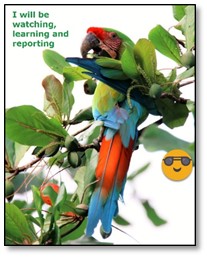